Manufactured by ourselves to the highest standards in house, these new engine looms maintain the original wire colour coding to make connection testing and diagnostics easier. Assembled with black braided sheathing and labelled connections, all looms have crimped and soldered pins to ensure the wires are fully secure in the connectors!

We manufacture the looms as stand alone items, very much as the loom was originally made in the 2WD cars, so that these looms can be fitted to any vehicle. We can do custom length looms to suit YB engine installation into other vehicles, as well as looms for RS Turbo’s running Weber Marelli engine management.

In Sierra applications, the entire original engine loom is removed and replaced with our new units, but the Escort Cosworth has an integral loom built into the vehicle fuse box! In these cars we remove the engine bay section of the loom, remove the relevant relays in the fuse box for the fuel pump and ecu power, and install our new stand alone engine loom, with a rewired fuel pump. This is not only far more reliable, but also helps preserve the vulnerable fuse box from further degredation due to the removal of considerable current draw from the original ECU and fuel pump power feeds. 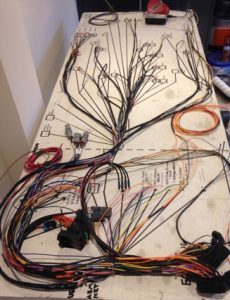